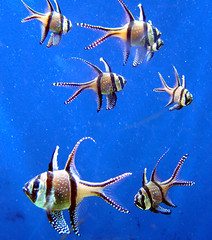 According to wholesale tropical fish supplier Gary Smith, of East Coast Tranship, the Blue Bee shrimp is a species that is becoming quite popular with owners of small aquariums. The Blue Bee Shrimp is comparatively new to the shrimp hobby, having first been introduced around March 2008.

This shrimp can be many colors and is occasionally hard to get because it is caught in the wild and is just recently starting to be bred by hobbyists in significant numbers. The Blue Bee is a species found in freshwater streams in China. So far most all of the Blue Bee Shrimp obtained by hobbyists from the pet store trade are wild caught. However, since breeding has begun, captive bred specimens should not take long to hit the hobby shelves.

Successful breeding has been reported in a pH range of 6.5 to 6.8 with a temperature of 74 Fahrenheit. These parameters are very similar to the factors required for the Crystal Red Shrimp or Bee Shrimp. Since this is a close relative of those two species, Gary recommends that the same care should be applied to the Blue Bee Shrimp.

It is best to do feeding once per day. Only feed an amount of food that the shrimp can finish within 2-3 hours maximum. It is not good to feed in excess and have food sitting for too long. Overfeeding is a known cause of death and can also cause water quality issues. Because shrimp are scavengers in the wild, they will eat anything they can find and are not accustomed to a constant food source.

Most freshwater tropical shrimps are undemanding in their care requirements. They should be kept in a well-established aquarium with no predators. The most important factor for water parameter is stability and as long as none of the water parameters are in the extremes they should be happy and healthy.

Because of the shrimps’ non-aggressive manner and their algae-eating habits, they are also widely popular in natural/planted aquariums. If there is not enough algae present, foods intended for aquarium fish and invertebrates can be used as a supplement to their diet. Another fine supplement is vegetables that have been boiled just until they are soft.

There are a good number of other distinct and colorful species of shrimps that can bring interest to small aquariums such as the Black Crystal Shrimp, Red Cherry Shrimp and the White Spot Shrimp.

And to inquire more about our tropical fish, go to
http://www.tropical-fish-wholesale.com/price-list.htm
To see the pictures of these tropical fish noted in the article, visit our blog http://tropical-fish-wholesale.com/blog – East Coast Tranship, Inc. is a Freshwater Tropical Fish Wholesale Supplier that sells to the pet store trade only for over 25 years. We are a direct importer which means you save 50 to 70% over wholesale prices. To ask questions or place orders call 301-782-1025