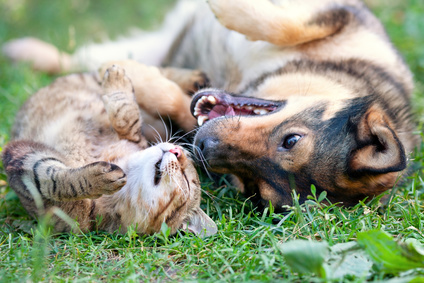 Cat and dog living together peacefully and in harmony, a mission impossible? Popular belief wants dogs and cats to be the worst enemies of the world. But it is far from being true! Beautiful friendships between kitties and doggies prove it to us every day!

Here are some tips to help make a dog and a cat live together, and see them becoming the best friends in the world!

Pawings, bitings, scratches… This is how dogs and cats are getting along, according to the popular expression. But in the relationship between Max and Kitty, all isn’t that bad, on the contrary.

Passed the course of the first encounter, which is often equivalent to a dialog of the deaf, our 4-legged friends lay down arms and can perfectly become friends.

The period of the misunderstandings between dogs and cats

It is indeed the first face to face, which corresponds to the thorniest moment. These two characters so different, independent cats, gregarious and disciplined dogs, face a real lack of communication.

Our companions do not have the same language and their codes, being intraspecific, do not function. When the cat raises her paw, she threatens her partner that he will get a scratch, while the dog believes in an invitation for playing.

The development can raise some concerns in some cases. When the cat just delivered kittens, for example, she remains aggressive.

If the cat is old and sick, she takes refuge in isolation, avoiding games as unpleasant as exhausting. Lastly, if pussycat lives with a person alone, she became so exclusive and possessive that she feels reluctant to the life with at three.

Cohabitation between dogs and cats: a question of territory

The concept of territory also influences the relation between dog and cat. The situation is more delicate when the cat was in the house first.

Upset by this violation of property, the cat growls, scratches, arched back, spiked hairs, makes herself appear significantly bigger in size than normal to intimidate the other!

The atmosphere is more serene if the dog was first in the house. He accepts the intruder well, in spite of his sharp attachment with the territory. He acquired this tolerance from the initial socialization, period during which he must mingle with foreign people and accept other species than his.

He acts then by imitating his mother or because his owner educates him and civilizes it.

Races of dogs more predisposed with the cohabitation

The best cohabitation between cats and dogs is moreover often related to the race of the dog. Among the most cat friendly canines, there is the Poodle, the German Shepherd, which have a sociable temperament, the Bulldog, Carlin, the Whippet and other Greyhounds, very independent, the sheepdogs, Newfoundland, known for their protective instinct.

On the other hand, introductions are to be avoided between cats and terriers like the Jack Russell… The latter run as much after cats as after rodents.

Certain cats are predisposed to share a life with a dog, ex: stray cats, the European, the Chartreux.

3 easy ways to improve the cohabitation between dogs and cats

Some precautions are to be taken, starting with the introductions. No way to turn our backs on our two friends to let them staring at one another like statues.

That would quickly turn into a fight. Constantly avoid creating jealousy between dogs and cats. Both are a touchy susceptible and can not tolerate the slightest injustice.

If you pet one, pamper the other. Be aware not to privilege the newcomer! The old one feels quickly abandoned and excluded. Even if the first needs tenderness to adapt, act in secrecy to preserve the second.

To improve the cohabitation between a dog and a cat, it is essential to respect the strategic points: i.e. the feeding corners. Each one will have his own bowl, and for the resting, it is exactly the same principle, each one his own bed or basket.

Once the territory delimited, an understanding is established between the two species. then Then we find the dog and the cat in the legs of each other, hairs all wet from mutual grooming session or even breathless after a chasing game.

When they are as thick as thieves, foolishness is about to belong to the program. Ragged slippers, vases in pieces… the list is long. The union is so perfect that, due to imitation, we don’t always know who is the dog and who is the cat!

A final advice would be to raise them together. To raise a kitten and a pup together or bring home at the same time an older cat and dog are probably the easiest solution.

It is still necessary to be available upon the arrival of these two rascals to supervise them assiduously. Then they settle down and will become a quite happy pair.

Related articles across the web